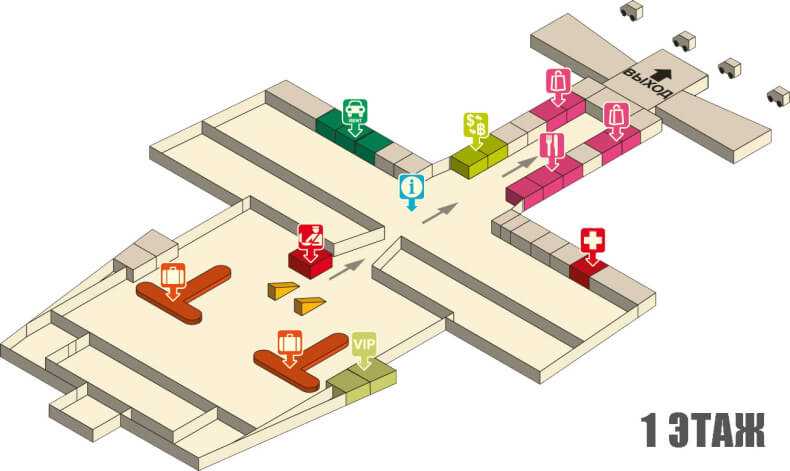 Daily Krabi Airport serves thousands of Thais and visitors to the country. The air gateway to the sunny southern region of Thailand buffeted by the Andaman Sea has seen a steady increase in passenger traffic, with service, carriers and destinations all improving as well. In the detailed airport overview below, you’ll find all the information you need, including post-arrival activities, travel plans, terminal descriptions, carriers operating flights to Krabi Province.

The first floor is predominantly occupied by lounge areas and food courts. You don’t have to leave the floor if you’re looking for: a luggage collection belt, currency exchange (where to change currency in Thailand?), a shop with national souvenirs, a grocery store, a stall with newspapers, guides and maps, an information booth, a bus station ticket office, a medical clinic, a cafeteria and car rental and other transportation.

The second floor was almost entirely taken up by the arrivals and departures lounges. The arrivals area houses the country’s immigration office and the passport control counter for arriving passengers. To enter the city one must go down to the first floor, as Krabi Airport Thailand does not provide access via the second floor.

The third floor of the airport is occupied by passenger lounges equipped with comfortable seating. Here you’ll also find the tourist information office and the customs inspection area. It is through the screening area that you must go to the international flights lounge, located on the right side of the third floor.

The fourth floor of Krabi Airport is reserved for a special guest (VIP) lounge and several catering establishments. The main part of the floor is a set of technical rooms for staff. There is no exit from the floor, but it is accessible via the third floor by an escalator.

It wasn’t that long ago that Krabi began to gain in popularity. Less than a quarter of a century ago, only domestic airlines and carriers operating with Singapore and Kuala Lumpur departed from here. The expansion has had little effect on the terminal monopoly, Bangkok Airways, which can only catch up with AirAsia in terms of the number of flights.

Modest, compared to the aforementioned airlines, the terminal load is given by Thai Airways and Nok Air. They account for literally 2-3 flights a day. The Chinese route, opened just a few years ago, was immediately taken over by Shanghai Airlines and Sichuan Airlines. And the Singapore destination, which is in considerable demand, is provided by Tigerair aircraft. Flights from other international companies occasionally land at the airport, but it is extremely rare.

We cannot describe in detail all the flights and destinations served by the terminal. More up-to-date information can be found on Krabi airport online board or on the numerous interactive flight search resources. Many planes fly only seasonally, and for some destinations flights are less than once a week.

Many planes fly only seasonally, and for some destinations flights are less than once a week.

In terms of the length of the flight, by the way, the record holders for the shortest time spent in the air are the routes Krabi-Bangkok and Krabi-Kuala Lumpur. And flights to Bangkok may differ in the final landing point, some flights go to Don Muang and others go to Suvarnabhumi Airport, clarify this point to plan the trip from the airport to the hotel booked in advance. Read more, how to get from Bangkok to Krabi.

It’s worth noting that the airlines I haven’t described may also appear on the interactive airport scoreboard. But the lion’s share of “unknown” airlines turn out to be the subsidiaries of the Thai monopolist Bangkok Airways. And Bangkok Airways can hide behind not only Asian but also European carriers.

How to get from airport to resorts?

Taxi. When you need to leave Thailand it is more practical to get to Krabi airport by taxi. By car you can catch the check-in and not miss your flight. You can easily get there from Krabi town, The resort of Ao Nang and the surrounding areas. From the island resorts the best how to get to the airport in Krabi know boatmen, they should be approached. Only it is better in advance, again, so as not to miss your flight. ticket must be purchased at a special window on the first floor of the terminal. After paying a flat rate you need to go to the platform near the airport, choose a cab driver with a license, show him the ticket you bought in advance, and go. Cab drivers take you to the boat dock, where you will have to get to the islands in the company of boatmen.

Bus. By bus getting from the airport to the beach will be strikingly cheaper. A cab is advantageous only if you are late or if you travel in a group that can fit into the cab. In other cases, you can easily get from the airport to the city for only 90 baht, a bus ticket to Ao Nang costs about 150 baht. Relative to the price tag from licensed cab drivers, the fare seems incredibly low.

Car. As mentioned earlier, there is a car rental service in one area of the airport. So right upon arrival, you can stop by the office of one of the companies, familiarize yourself with the conditions of renting a car and pay for the service. By the way, remote car reservation systems have been developed for interactive travelers, they can be easily found on the websites of Avis, Budget and National. Departing from the airport is not difficult, there is a convenient exit near the airport to the state highway 4, from which, in turn, you can turn off on the way to any settlement.

Transfer.Shuttle service from the hotel where you will be checking in is provided, most often, to guests who have booked a room. If you are expected, the hotel will send a driver in a car. The driver will hold a sign with your name on it, which will allow you to easily find him in the crowd of people meeting you. The transfer is a little more expensive than a cab, but some large hotels may include the service in the rent of the apartment. Also book a transfer on your own through KiwiTaxi.ru. Keep in mind that it is problematic to get to Raleigh Peninsula by land. Prepare that the transfer will include a boat ride. In total, you will have to spend from 1200 to 1500 baht for the trip, including the boat trip. Some hotels are difficult to reach on your own, takes too much time, etc., in which case you should not skimp on the transfer.

How to get back to the airport?

Taxis have already been mentioned before. Its counterpart is an airport transfer service. The cost of the trip directly depends on the distance to the terminal and the complexity of the way. On average it takes 20 minutes to get from the center of Krabi by cab or hotel car. From Ao Nang you have to get at least half an hour, from Klong Mung – up to an hour. A great option to save on travel is a shuttle bus transfer, which passes the hotels and picks up guests at the airport in accordance with the start time of check-in.

All of the methods described in the previous paragraph also work. The main thing is to consider that it is better to arrive at the airport 2-2.5 hours before the flight departure. This allows time to pass through passport control, drink a cup of coffee and get on board without rushing.