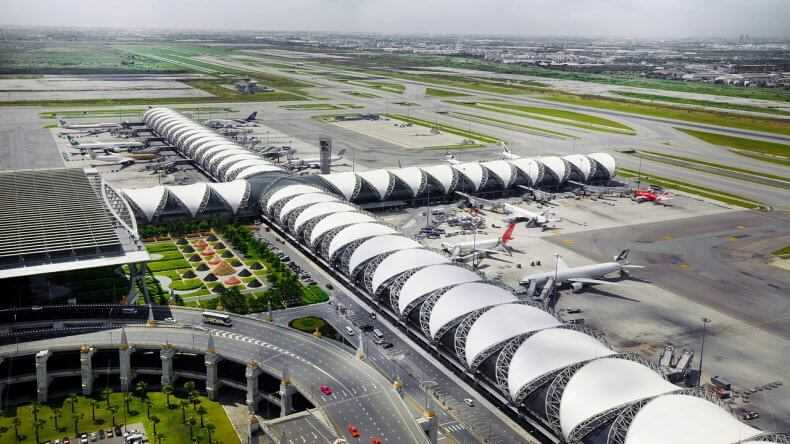 The Thai economy is based on tourism and ninety times out of one hundred travelers arrive in this country by air, often a very long flight of more than ten hours. This is why the cramped and stuffy cabin of the passenger Thailand’s airports appear to be the threshold of paradise, which, in principle, is not too far from the truth.

There are air harbors near every major city or tourist destination. And Bangkok has two: the old Don Muang, mostly used for domestic flights, and the new Suvarnabhumi, Thailand’s main international airport. This is where tourists most often arrive with a connecting transfer to Pattaya.

Today we’ll tell you which airports in Thailand are the busiest for tourists and what they are notable for. And if you are interested in how many airports there are in Thailand we can answer right now: there are more than fifty, thirty of which are used exclusively by civil aircraft. The rest share runways with the Royal Air Force.

Suvarnabhumi Airport in Thailand is the kingdom’s main air harbor. It received its first flight in 2006. The name, difficult to pronounce at first sight, translates as “Golden Land”. The name was given by the king himself, reminding everyone arriving in his domain of the legendary kingdom that existed here in ancient times. From cab drivers you may hear another – “Suvannapum” or “Suanaphum”, unofficial, used in everyday life. And evil tongues claim that the place was formerly called “Cobra Swamp”.

It is located 25 kilometers east of the administrative center of Bangkok and is connected to it by a separate branch of subway. During the year almost fifty million people pass through its terminals. It receives international and domestic flights. It occupies an area of 3 000 hectares. The building of the main terminal has four floors, two runways are 4000 and 3700 meters long. There are plans to build the second stage of the Thai airport – to increase the number of runways to four and to build a terminal for low-cost companies.

Don Muang Airport in Thailand is called “old,” and that is no exaggeration – it has been in operation since March 1914. In 2006, in terms of passenger traffic, it was the second largest in Southeast Asia and the 18th largest in the world. Located 24 kilometers north of the capital, it is connected to it by highway and railway (Hua Lampong Station).

It is located 24 kilometers north of the capital.

Today it serves passenger and cargo flights, including charter flights, on domestic routes, but it has not lost its international status. It is a very popular air harbor among tourists, as most of the low-cost companies are based there and the prices of tickets are quite affordable.

The airport is a popular destination for tourists.

Phuket Airport in Thailand is considered the second most important airport, and it has been operating for over twenty years. It has international status, there are direct flights to Moscow, Helsinki, Paris, Munich, but most of the foreign flights go to the countries of Indochina peninsula and Japan.

It is located thirty kilometers north of Phuket Town, next to Mai Khao beach. The passenger terminal is two-story. The first is the arrivals area, the second is the departures area. There are direct regular bus services only to Phuket Town. To get to other points on the island will have to make a change. Tourists arriving on the tour are met by buses, which take them to the hotel door. This service is usually included in the price of the tour.

Samui Airport in Thailand is one of the few privately owned air harbors in the country. It is owned by Banqkok Airways, which dictates ticket prices, which are usually expensive. It has been receiving and departing flights since 1989.

The architecture of the terminal is remarkable: it is stylized as a gazebo with a high two-tiered roof supported by pillars resembling palm tree trunks. Inside, there are comfortable wicker chairs and a large green bed in the center.

This Thai airport is very well located: on the central island of the archipelago, near the ferry crossing. This is the place where the “crazy” party-goers who go to Ko Phangan Island gather. The “Full Moon Party”, a three-day event during the full moon, is held there monthly.

The international Utapao Airport in Thailand is the air gateway of Rayong province. It is located on the Gulf of Thailand, forty-three kilometers southeast of Pattaya and twenty-five northwest of Rayong City. Originally a Royal Air Force base, it now serves commercial civilian flights as well. Before Suvarnabhumi was built, it unloaded Don Muang, which was choked by tourist traffic. At the time of the military coup in 2008, it was the only operational Thai airport in the country.

Till now, it has been the only airport in the country.

It still has the status of a strategic facility, so it does not have a cab service. All other services, including a restaurant, jewelry store and Internet café, are operational. It is an intermediate landing point for flights to Samui and Phuket.

Chiang Mai Airport in Thailand is the main air gateway of the northern provinces. It is the third busiest in the country in terms of passenger traffic and volume. The passenger terminal is adjacent to a military base. Because of the proximity of the city – it is three kilometers from its center – it does not accept aircraft from midnight to five in the morning.

Krabi Airport in Thailand is a growing infrastructure designed for the upcoming increase in tourist traffic. It serves the resorts of Ao Nang, Reilly, Haad Yao, Phi Phi, Ko Lanta. The new four-story airplane-like terminal opened in 2006. At the same time it increased to 3 thousand meters long runway. It has international status, sends flights to Singapore and Malaysia, but most of the flights are domestic. It is capable of handling up to 3 million passengers a year, but so far, the number is less than 1.5 million. The service infrastructure is poorly developed, there is a medical center, cafes and small stores. It is about twelve kilometers to Krabi Town.

Surat Thani Airport in Thailand has international status, it is located near (about 21 km) the eponymous city of Surat Thani, the center of the province of the same name. It is the only place in the south of the country where low-cost companies are served. If it’s important for you to get from Bangkok to Samui and then from Samui to Phangan at the lowest cost, then buy tickets to this air harbor. Admittedly, the trip by bus to the ferry crossings will take you all day. The terminal is small and the service infrastructure is underdeveloped, although everything you need is available.

Nakhonsithammarat Airport in Thailand is considered a regional airport, serving domestic flights from Don Muang. It is located 14 km from the city of the same name, the center of the province. It competes with Surat Thani, as ticket prices can vary depending on the time of day and the time it takes to get to Don Mueang pier by land transport (over an hour) with a connection to ferry to the islands of Samui, Pangan or Ko Tao. To the latter, the closest way to get there is from Chumphon Airport in Thailand.

Chumphon Airport in Thailand was opened in 2008, located in the heart of the country at a distance of 500 kilometers from Bangkok and 35 from the city of the same name. It is the closest air harbor to Ko Tao Island. It can be used for flights from Bangkok to Samui and Phangan. There are snack stores and souvenir stores in the building itself.