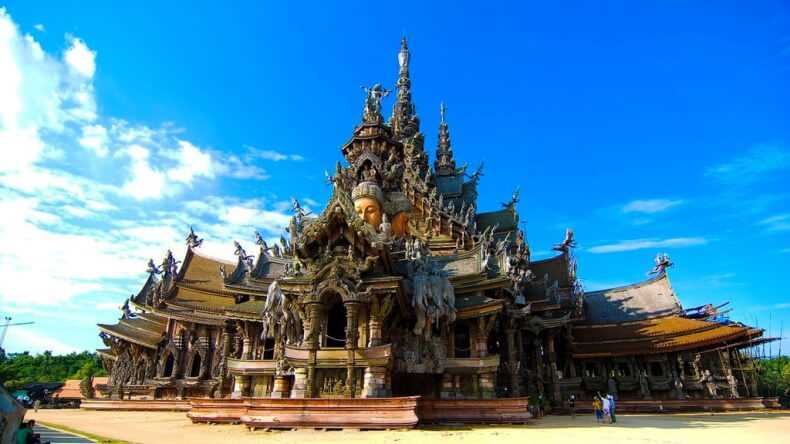 Thailand is a young country. It does not have many centuries-old monuments of history. But all newly built Buddhist temples mirror the mysterious sacred mythology of Southeast Asia. The Temple of Truth in Pattaya, which is considered one of the the most beautiful temples in Thailand, it is impossible not to notice, because the height of the building is over one hundred meters, also a “new construction”. It is created by all the canons of not only Buddhism, but also the Thai national architecture. Its walls are decorated with delicate carvings and numerous figures of people, animals and mythological monsters.

The legend of the Temple of Truth in Pattaya says that the basis for its construction was a vision to a local extravagant millionaire named Lek Viriyaphant. He received a message from above that he would live until the temple was completed. This was in 1981. The millionaire is no longer alive, but the construction of the Buddhist shrine continues to this day, now under the leadership of the founder’s son. In this, the temple is close to the work of the great Gaudi, whose design for the Sagrada Familia cathedral in Barcelona. Otherwise, it is full of national color and charm. It is also not so much a sacred structure as a demonstration of the richness of the cultures of Thailand, Cambodia, China and India, the pillars of Buddhism and Hinduism in the region.

The main spire of the temple is surrounded by four smaller ones, symbolizing the path to the Truth, they are decorated with figures of Thai maidens, and he himself is a figure of a rider on a horse called Pra-Shri, who is the fifth reincarnation of the Buddha, Aryamethai, the last of the Bodhisattva lineage. Each deva not only has a different appearance, but is endowed with a special meaning. The one holding the lotus flower represents Religion, the book represents Philosophy, the dove represents Peace, and the one holding the baby represents Life itself.

In general, any image on the walls of this enigmatic structure is of some sacred meaning. And if you try to make sense of each of them, you risk seeing the end of the construction. The ideological basis of the temple’s decoration project is the image of seven creators of all Being: the Father and the Mother, the Sky and the Earth, the Sun, the Stars, the Moon. It organically mixed Hindu and Buddhist symbols, the whole temple symbolizes the unity of different faiths. And not just Eastern religions.

Russians visiting the majestic Temple of Truth in Pattaya can feel the format breaking down. It turns out that the tallest wooden building in the world, and built without a single nail, is not located on the vast Eastern European Plain. It is located near Naklua Beach in Pattaya! The height of the main spire of the building is 108 meters (other sources say 105). Valuable woods were used in the construction – golden and silver teak (which, incidentally, was used to build King’s Palace in Hua Hin), red and black (iron).

The construction of the wood temple in Pattaya is ongoing, with 200 skilled wood carvers at work. The clatter of their hammers merges with the sounds of mystical music, and the women, babies and mythical monsters looking down from the vaults at the sightseers, heightening the sense of mystery and otherworldliness almost to the point of tangible reality.

How to visit the Temple of Truth

To get to the Temple of Truth in Pattaya, you need to get off at Naklua Street and follow it to Soi Naklua 12. Then there will be two left turns. Although the way to this attraction is quite winding, you won’t get lost. The spire of the temple, visible from afar, will be a landmark. The building itself is located on an artificial peninsula, surrounded on three sides by the waters of the Gulf of Thailand.

The entrance fee to the complex is 500 baht. Tours are from 8 am to 5 pm. One tour of the temple with a guide lasts half an hour. All money is used for the maintenance and construction of the Temple. Excursion to the Temple of Truth in Pattaya is supplemented by quad bikes, boats, horse carriages and elephants. You can get a session of foot massage. You’ll have to pay extra for all this.

Truth Temple on a map of Pattaya

Here you go, use the arrow keys to navigate.

Use the arrow keys to navigate.